Details
Written by David Crossley
The Way Out
Resources 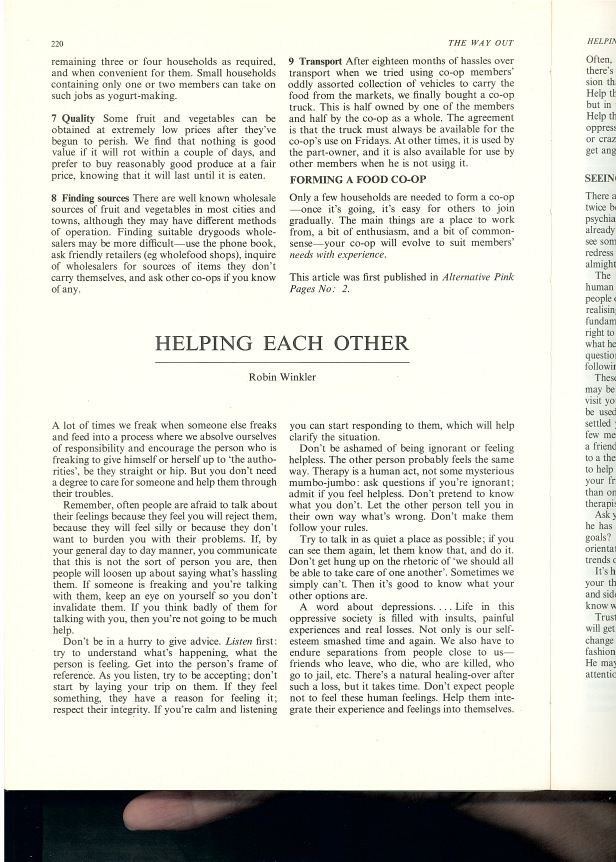 In order to buy food cheaply, you must have some understanding of the hierarchical structure of the food industry.

This is explained in the illustration below.

So before food actually reaches you, it can have passed through up to five different organisations. Each of these will, of course, add their own little mark-up to the price, as do the transport firms who cart the food around from one organisation to another. If you want cheap food, you have to aim to buy high up the hierarchy. The secret of doing this is to buy in large quantities, for it is quantity of food handled on which the hierarchy is based. The further up the hierarchy you go, the larger the minimum quantity of food the firms are willing to sell. This is the main factor determining to whom they will sell; as one wholesale distributor said 'If you rang up Edgell's today and ordered 150 cartons of tins of tomato soup, you'd probably get it—but that's the minimum quantity they're prepared to deal in.' There are other factors complicating the issue—some wholesale distributors refuse to deal with the public because they're afraid that their normal customers, the retail shops, would kick up a fuss.

If you want to buy food cheaply, first of all, you must realise that you're going to have to buy in larger quantities than you usually do—perhaps a sack of flour or brown rice instead of a couple of pounds, a carton of oranges, a box of lettuces, 10 kg of meat, 15 kg of cheese, 5 kg of nuts and so on. If 'you' represent just one person, or even onehousehold, this is almost impossible because of difficulties of storage and of financing the whole operation. One good way of getting round this is to form a FOOD CO-OP.

A food co-op is a bunch of people who share work and combine buying power in order to buy food cheaply and easily. There are as many different ways of organising a food co-op, as there are groups of people, and this article is based on the experiences and problems faced by one group only; freely adapt these ideas to the needs of your group if you want to form a co-op. We have found that we can save significantly over retail prices, save on overall time spent buying food, and eat a more nutritious type of food. Our organisational methods are still evolving after three years of once a week buying, and the range of foods is gradually expanding.

THE WEEKLY ACTIVITIES OF OUR CO-OP

Thursday evening People bring their households' weekly orders to a central house with their approximate value in cash and jars for honey and peanut butter. Also somebody from the yogurt-making household prepares sufficient skim-milk from dried powder and yogurt starter to make 20 kg yogurt after incubation overnight; average cost of a couple of cents per kg.

Friday morning Two or three people (rostered for the week) arrive to collate the fruit and veg parts of all the orders into a master shopping list and then head for the wholesale fruit and veg market in the co-op's truck (see 9 below). They park in one of the central aisleways. Here they check out the various produce agents' stalls looking for the best value. Minimum quantity is usually a 20 kg. bag or bushel box. Bargaining is accepted but usually at most 20–40 cents would be knocked off a $3 item, and some agents don't like it. As they purchase items, the buying team writes down the prices paid on the master shopping list.

Friday afternoon The morning's fruit and veg purchases are brought to a suitable room in one of the co-op member houses, where the drygoods are stored in an old wardrobe and in plastic garbage tins (new). Two or three people from the rostered households weigh out the stuff into separate orders. The amounts may have to be varied—eg., if 100 apples were ordered, and a box of 125 bought, then each household must take (and pay for) a few extra. It helps to put soft things like tomatoes on top, similarly with drygoods.

Now come the dreaded calculations first working out the prices on the master list, and then pricing items and totalling on each order including ten per cent for extra costs(see 4 below). We use a printed form (see illustration). Rather than give change or collect extra money we keep a book with a weekly running balance for each house—the balance for any week is the surplus or shortage for the week added into the balance for the previous week.

During the week Someone from the dry goods households (see 6 below) checks to see what items are running short, and goes to the appropriate wholesaler to buy, for example, 10 kg. drum of peanut butter, 20 kg. bag of soybeans, 15 kg. box of sultanas, 25 kg. bag of wholemeal flour, 5 kg. wheatgerm, 10 kg. bag of rolled oats... Then a couple of people weigh out the appropriate items in to 1 kg. paper bags so that it's ready to go on Fridays. And every couple of weeks there's the big event of muesli mixing: it takes an hour or so for two people to mix a 20 kg. batch, and it's really worth it because we save twenty or thirty cents a pound over supermarket/health food shop prices, and make better muesli.

There's quite a lot involved as you've seen, but this work is divided amongst the 60 or so co-op members (imagine the number of individual trips to the shops that they would have to make instead). This means that nearly everyone has to have a weekday free about once a month, so for some types of household a different form of organisation would be required. Where a number of households have young kids at home, a shared childminding arrangement could be worked out to free people for going to the markets (and for any other reason on other days).

Some of the problems we've faced (and more or less solved):

1 Size If the co-op's too small, each person has to work every couple of weeks, and the combined buying power is not great enough for wholesale buying. If too large, there is too much work necessary on each market day, organising a roster is very hard, and the whole co-op becomes too impersonal and bureaucratic. Around ten to fifteen households, i.e., about forty to seventy people, seems to work.

2  Responsibility If the co-op depends on a very small number of people for organising or anything else, then the aspect of cooperation is reduced and the whole thing falls apart if those people become unavailable for any reason. Therefore the co-op has to be fairly simply organised, and everyone encouraged to learn how everything works (and to get to know one another).

3 Trust If you're not prepared to trust everyone a little, you're not ready to join a co-op. We've found that there are almost no money problems, and that nearly every household does its fair share.

4 Money A certain amount of capital is needed in order to have drygoods (groceries) in stock—$1  per adult in our case. For the weekly orders, each household supplies the approximate value in cash with the order. Rather than give change or charge extra when the order is picked up, a running balance for each household is kept in a book (see illustration). Ten per cent is added to each order to cover losses and spoilage, paper bags, transport costs and duplicated order forms, and to gradually increase available capital for drygoods.

6 Sharing the work The major part of the work for our co-op is on Fridays, collating orders, buying fruit and vegetables, and sorting the orders, so we have a roster with ten houses in groups of two or three over four weeks. The rest of the work—buying drygoods, mixing muesli, and weighing out everything into 0.9 kg. bags—is done by the remaining three or four households as required, and when convenient for them. Small households containing only one or two members can take on such jobs as yogurt-making.

7 Quality Some fruit and vegetables can be obtained at extremely low prices after they've begun to perish. We find that nothing is good value if it will rot within a couple of days, and prefer to buy reasonably good produce at a fair price, knowing that it will last until it is eaten.

8 Finding sources There are well known wholesale sources of fruit and vegetables in most cities and towns, although they may have different methods of operation. Finding suitable drygoods whole-salers may be more difficult—use the phone book, ask friendly retailers (eg wholefood shops), inquire of wholesalers for sources of items they don't carry themselves, and ask other co-ops if you know of any.

9 Transport After eighteen months of hassles over transport when we tried using co-op members' oddly assorted collection of vehicles to carry the food from the markets, we finally bought a co-op truck. This is half owned by one of the members and half by the co-op as a whole. The agreement is that the truck must always be available for the co-op's use on Fridays. At other times, it is used by the part-owner, and it is also available for use by other members when he is not using it.

Only a few households are needed to form a co-op—once it's going, it's easy for others to join gradually. The main things are a place to work from, a bit of enthusiasm, and a bit of common-sense—your co-op will evolve to suit members' needs with experience.

This article was first published in Alternative Pink