Details
Written by Peter Ellyard
The Way Out
Living Structures 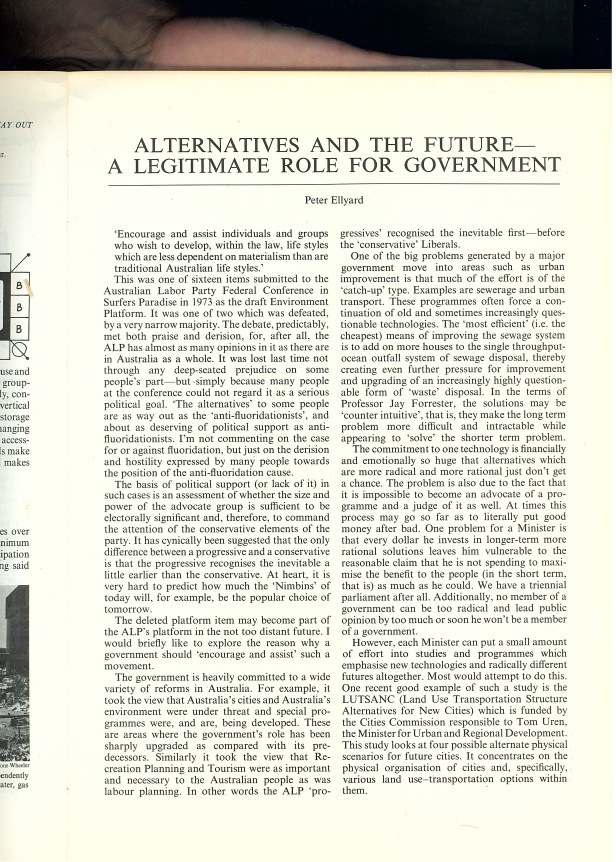 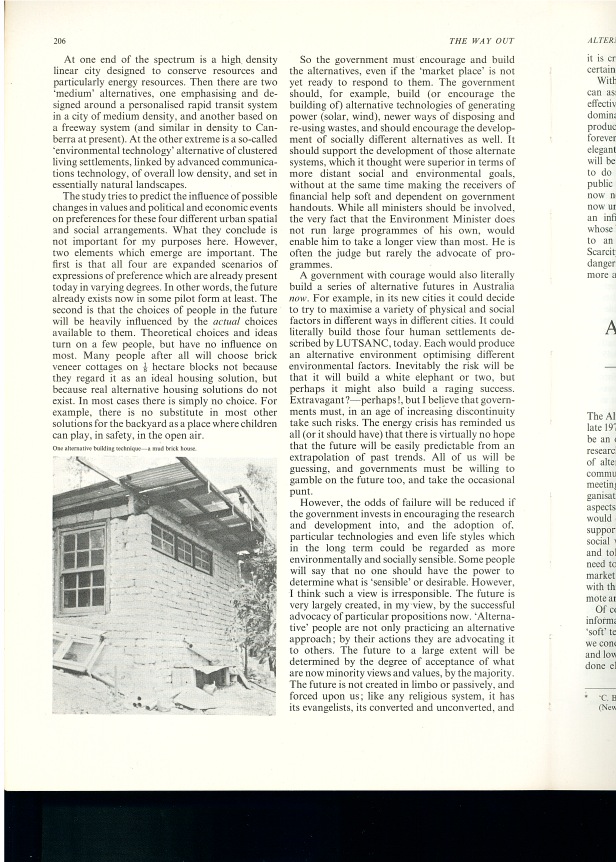 ALTERNATIVES AND THE FUTURE - A LEGITIMATE ROLE FOR GOVERNMENT

'Encourage and assist individuals and groups who wish to develop, within the law, life styles which are less dependent on

This was one of sixteen items submitted to the Australian Labor Party Federal Conference in Surfers Paradise in 1973 as the draft Environment Platform. It was one of two which was defeated, by a very narrow majority. The debate, predictably, met both praise and derision, for, after all, the ALP has almost as many opinions in it as there are in Australia as a whole. It was lost last time not through any deep-seated prejudice on some people's part but -simply because many people at the conference could not regard it as a serious political goal. 'The alternatives' to some people are as way out as the 'anti-fluoridationists', and about as deserving of political support as anti- fluoridationists. I'm not commenting on the case for or against fluoridation, but just on the derision and hostility expressed by many people towards the position of the anti-fluoridation cause.

The basis of political support (or lack of it) in such cases is an assessment of whether the size and power of the advocate group is sufficient to be electorally significant and, therefore, to command the attention of the conservative elements of the party. It has cynically been suggested that the only difference between a progressive and a conservative is that the progressive recognises the inevitable a little earlier than the conservative. At heart, it is very hard to predict how much the 'Nimbins' of today will, for example, be the popular choice of tomorrow.

The deleted platform item may become part of the ALP's platform in the not too distant future. I would briefly like to explore the reason why a government should 'encourage and assist' such a movement.

The government is heavily committed to a wide variety of reforms in Australia. For example, it took the view that Australia's cities and Australia's environment were under threat and special programmes were, and are, being developed. These are areas where the government's role has been sharply upgraded as compared with its predecessors. Similarly it took the view that Recreation Planning and Tourism were as important and necessary to the Australian people as was labour planning. In other words the ALP 'progressives' recognised the inevitable first before the 'conservative' Liberals.

One of the big problems generated by a major government move into areas such as urban improvement is that much of the effort is of the 'catch-up' type. Examples are sewerage and urban transport. These programmes often force a continuation of old and sometimes increasingly questionable technologies. The 'most efficient' (i.e. the cheapest) means of improving the sewage system is to add on more houses to the single throughput-ocean outfall system of sewage disposal, thereby creating even further pressure for improvement and upgrading of an increasingly highly questionable form of 'waste' disposal. In the terms of

Professor Jay Forrester, the solutions may be 'counter intuitive', that is, they make the long term problem more difficult and intractable while appearing to 'solve' the shorter term problem.

The commitment to one technology is financially and emotionally so huge that alternatives which are more radical and more rational just don't get a chance. The problem is also due to the fact that it is impossible to become an advocate of a programme and a judge of it as well. At times this process may go so far as to literally put good money after bad. One problem for a Minister is that every dollar he invests in longer-term more rational solutions leaves him vulnerable to the reasonable claim that he is not spending to maximise the benefit to the people (in the short term, that is) as much as he could. We have a triennial parliament after all. Additionally, no member of a government can be too radical and lead public opinion by too much or soon he won't be a member of a government.

However, each Minister can put a small amount of effort into studies and programmes which emphasise new technologies and radically different futures altogether. Most would attempt to do this. One recent good example of such a study is the LUTSANC (Land Use Transportation Structure Alternatives for New Cities) which is funded by the Cities Commission responsible to Tom Uren, the Minister for Urban and Regional Development. This study looks at four possible alternate physical scenarios for future cities. It concentrates on the physical organisation of cities and, specifically, various land use—transportation options within them.

At one end of the spectrum is a high density linear city designed to conserve resources and particularly energy resources. Then there are two 'medium' alternatives, one emphasising and designed around a personalised rapid transit system in a city of medium density, and another based on a freeway system (and similar in density to Canberra at present). At the other extreme is a so-called 'environmental technology' alternative of clustered living settlements, linked by advanced communications technology, of overall low density, and set in essentially natural landscapes.

The study tries to predict the influence of possible changes in values and political and economic events on preferences for these four different urban spatial and social arrangements. What they conclude is not important for my purposes here. However,

two elements which emerge are important. The first is that all four are expanded scenarios of expressions of preference which are already present today in varying degrees. In other words, the future already exists now in some pilot form at least. The second is that the choices of people in the future will be heavily influenced by the actual choices available to them. Theoretical choices and ideas turn on a few people, but have no influence on most. Many people after all will choose brick veneer cottages on hectare blocks not because they regard it as an ideal housing solution, but because real alternative housing solutions do not

exist. In most cases there is simply no choice. For example, there is no substitute in most other solutions for the backyard as a place where children can play, in safety, in the open air.

So the government must encourage and build the alternatives, even if the 'market place' is not yet ready to respond to them. The government should, for example, build (or encourage the building of) alternative technologies of generating power (solar, wind), newer ways of disposing and re-using wastes, and should encourage the development of socially different alternatives as well. It should support the development of those alternate systems, which it thought were superior in terms of more distant social and environmental goals, without at the same time making the receivers of financial help soft and dependent on government handouts. While all ministers should be involved, the very fact that the Environment Minister does not run large programmes of his own, would enable him to take a longer view than most. He is often the judge but rarely the advocate of programmes.

A government with courage would also literally build a series of alternative futures in Australia now. For example, in its new cities it could decide to try to maximise a variety of physical and social factors in different ways in different cities. It could literally build those four human settlements described by LUTSANC, today. Each would produce an alternative environment optimising different environmental factors. Inevitably the risk will be that it will build a white elephant or two, but perhaps it might also build a raging success. Extravagant ?—perhaps but I believe that governments must, in an age of increasing discontinuity take such risks. The energy crisis has reminded us all (or it should have) that there is virtually no hope that the future will be easily predictable from an extrapolation of past trends. All of us will be guessing, and governments must be willing to gamble on the future too, and take the occasional punt.

However, the odds of failure will be reduced if the government invests in encouraging the research and development into, and the adoption of, particular technologies and even life styles which in the long term could be regarded as more environmentally and socially sensible. Some people will say that no one should have the power to determine what is 'sensible' or desirable. However, I think such a view is irresponsible. The future is very largely created, in my view, by the successful advocacy of particular propositions now. 'Alternative' people are not only practicing an alternative approach; by their actions they are advocating it to others. The future to a large extent will be determined by the degree of acceptance of what are now minority views and values, by the majority. The future is not created in limbo or passively, and forced upon us ; like any religious system, it has its evangelists, its converted and unconverted, and it is created by advocates of certain preferences, certain values.

Without buying out the converted, a government can assist them make their point of view more effective. If this doesn't happen, the future will be dominated by the directors of the economic productive system, who will advocate a future with forever larger sales of their products. This was elegantly said by C.B. McPherson—'the tendency will be for the directors of the productive system to do everything in their power to induce the public to believe that their wants are infinite. It is now necessary to demolish the timebound and now unnecessary and deleterious image of man as an infinite consumer and infinite appropriator

whose rational purpose in life is to devote himself to an endless attempt to overcome scarcity. Scarcity now is dispensible and we are now in danger of having it rivetted upon us in a new and more artificial form. We should say so. If we do not the liberal democratic heritage of western society has a poor chance of survival:*

The various organs of the United Nations, such as the Governing Council on Environmental Programmes are committed to 'Ecodevelopment', particularly in the third world, whereby ecologically sound development and management of resources is encouraged. The third world in a sense has a clean slate and can start afresh. We have many vested interests against such concepts at home. Clearly we should be encouraging at home what we are preaching abroad. Many people in our country are committed to this concept. At the moment they are doing it without encouragement and assistance from the government. They deserve some assistance.

These are briefly some of the ideas which generated that particular platform item. The case for it will be stronger next time. Perhaps the ALP will seek to incorporate it in their platform then.